A Nook for Sophie 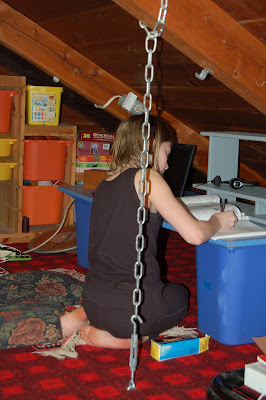 At some point, probably very early on, whoever built the place decided that a loft would give some much-needed storage space. So they slung a low ceiling over the larger of the two rooms and created a crawl-space of a loft above. The engineering is rather interesting. We assume it's safe, since it's lasted several decades already without incident. The floor of the loft isn't supported on proper joists as far as we can tell. Part of the load is taken by the roof joists, through a funky arrangements of chains and turnbuckles. It's not pretty but it seems to work.

Anyway, Sophie has been craving a bit more privacy and quiet for her academic work. From her perspective I don't think Erin can move out soon enough. She would love a quiet room into which she could retreat for reading, bookwork or just chilling out. But not only does she share a bedroom with Fiona, but that bedroom is so tiny that there's barely room for the bunk bed and clothes. You can hardly walk around the bed without shuffling your body along sideways. So there certainly isn't any space for a desk.

So we looked at the loft. It was packed full of junk. The remains of hobbies past, broken furniture, baby clothes, toys for toddlers, craft supplies no longer desired, projects built by younger children, archived sheet music, medical diplomas, Christmas decorations, photographic slides, I'm sure you can imagine. We spent some time organizing, reshuffling, recycling, tossing. And we ended up with a nook just big enough for a kneeling desk made out of two IKEA Trofast bins (still containing their Playmobil castle parts and Brio train bits) and a piece of plywood. It's a little bit like Harry Potter's cupboard under the stairs, but hey, it's warm -- the heat from the wood stove rises, of course -- and it works for her.

She has her dad's old laptop up there to do Rosetta Stone French, her math book, her science textbook and workbook, some writing utensils and Larry Gonick's "Cartoon History of the Universe" series. Fiona's jealous. We'll be working on her nook next. It will be even smaller and with even less head room. Small living, growing kids, it has its challenges.
Labels: Homeschooling, Living simply