Who'd have thought that almost three years into this I'd still be discovering completely new things about running? Yet this is how it is, and that's what keeps it all fun and interesting.

First, I had an absolutely terrible long run a week or so ago. It was only 24 km, and I had managed 30 the week before without difficulty. But that fateful day my calves felt tight and sore and within 4 km I was feeling achey in my feet, ankles and knees. It went on like that for the next three hours as I got progressively slower and more demoralized. Yuck.

The next day I went out to at least try and stretch my legs a bit and work some of the aches out. Within a minute or two I felt great. My running mojo was back and my body felt fine.

Why? The only explanation I could come up with was that my nasty long run had been the second of two runs in a row in shoes. My mojo-ful run was barefoot. Shoes are hurting me. A shod run once in a while my body seems able to handle. Two days in a row is too much. At that point I'd better get back to barefoot, or to huaraches at the most.

I accidentally repeated the experiment. Yesterday I had run in shoes because there was lots of gravel on the highway and I was doing a tempo run (i.e. a fast-paced run). And today the conditions were blizzard-like, so I put the shoes on again. The sore calves were back with a vengeance and the aching in the ankles and knees began within 5 minutes. I figured that was due to the previous day's hard and fast run and hoped it would wear off if I ran slowly. It didn't. By the 4 km mark I had reached a point of angry frustration and I took the silly shoes off. Barefoot, the discomfort vanished after a few steps and never returned. Hmm. Hypothesis confirmed, it seems.

Which led me to more on my second discovery which is that running barefoot in the winter isn't really that big a deal. Dry asphalt is a dream, even down to minus 10ºC. Wet asphalt is more challenging, but if I warm my body up to the point where I feel I am just beginning to sweat, and then drop the shoes, my feet are pumping enough heat through them to stay quite comfortable. If I don't go through that warm-up period the cold feels uncomfortable for the first 8 or 9 minutes but once the furnace turns on I'm good. I was leery of running in snow, though. Running through occasional patches of it had always been such a shock to my soles. But today I was kind of forced into it -- or else bail on my run -- and I discovered that it's really not bad. Snow is kind to the feet from an abrasion and cushioning standpoint. There may have been gravel on the highway, but the snow buried it, and the conforming cushioning of the accumulating flakes was soft and enjoyable. Sure, it was cold, particularly when it was deep enough that it was brushing past the tops of my feet. And I would wear a warmer jacket and hat if I was planning a run like that again. But it's certainly no hardship to run in the snow.

Third discovery: my feet are getting much stronger and smarter. Last summer I read the Centre for Endurance Sport's Criteria for Successful Barefoot Transitioning and discovered that the one-leg balance test was something I failed on my right leg every time. My left foot was up to the 30-second task, but my right was rarely capable of going more than 10 or 12 seconds. I repeated the test a couple of weeks ago and now I can not only stand more or less indefinitely on each foot flat on the ground, but I can manage 20 seconds on my toes (much more challenging!) on my left foot and 12 or 14 on my right foot. So there's still a bit of a difference, but both feet are much stronger.

Final discovery: low heart-rate training, also known as the Maffetone method. It's a formulaic approach to the basic strategy of running really slowly and easily most of the time, maybe even all of the time, when training for an endurance sport like distance running. Using the Maffetone method you calculate a maximum heart rate by subtracting your age from 180 (with some possible modifying criteria) and you use a heart rate monitor to ensure your training runs don't have you exceeding that. I've been trying to stay within these parameters for almost two months. Not obsessively so, but mostly managing. It takes a lot of trust in the approach to run that slowly. In the past most of my day-to-day runs would have my heart rate ranging from 138 to 162. To consistently keep it below 135 meant a much slower pace. And to do that day after day, shuffling along at a pace two or three minutes per mile slower than had been my habit, never putting the pedal to the floor or anything even close, and then to trust that you are indeed getting fitter and faster ... well it's certainly an exercise in patience.

I mentioned my tempo run yesterday. That was only my second faster-than-a-shuffle run since December.  I started out aiming to run moderately hard and hit an average pace in the green zone (see graph). But it felt great, and after the first half which was the uphill leg I still had lots in the tank so I poured it on during the downhill return. I beat my target pace by a lot and shaved almost a full minute off my all-time record for 5k, a record I'd set in July 2009 when I was doing lots of fast hard runs and was two and a half years younger. Fifty-three seconds is a huge improvement, especially considering I didn't really turn it on until half way through. So hey, this approach actually works! I'm happily back to running slowly, now confident that it's the right approach. I continue to mind my Garmin when it beeps to remind me to slow to almost-a-walk as I climb a hill.

One last graphic, to show my year to date relative to my (admittedly conservative) mileage goal. Not bad for the last week of February! 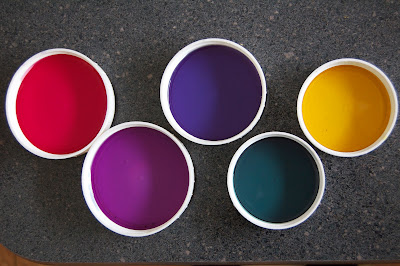 Just over a month ago Fiona received her favourite Festivus gift. I bought her a set of four TOPS Chemistry units, complete with the equipment and supplies kits that made them completely self-contained and drop-dead simple to implement in the kitchen. While I'm by nature a scrounger and a make-do-er, I've recognized that the little details involved in, say, finding a little household iodine solution are often time-consuming and sometimes delay the implementation of whatever activity someone wants to do. The learning momentum can easily collapse when there are multiple delays.

So we splurged and got the little kits containing ziplocs of common chemicals, test tubes and pipettes. We had some of that stuff, but the package deal was so simple.

We're both really impressed with the task-oriented teaching in the units. Fiona has just about finished the first of the four units, the one on chemical analysis. It's described as being suitable for Grades 5-10, and though it's perfect for Fiona, I think it would be a pretty light-weight program for a high schooler. Still, it's far more in-depth and sensibly, workably hands-on than similar programs I've seen.

Pictured above is her red-cabbage-water indicator at various pHs. From left to right: pH=3 (with vinegar), pH=6 (with a single drop of vinegar) pH=6.5 (straight cabbage water), pH=9 (with kitchen cleanser) and pH=13 (with lye).