Unschooling or not, I took the bull by the horns. Erin had written "completion of Singapore 'New Math Counts' Level 1" into her Self-Design learning plan, quite voluntarily, back at the end of the summer. A term went by and we were encouraged to revisit the plan and what's happened, learning-wise. Erin had not opened the Singapore book. I asked her if she wanted to set that as her goal for the next term. Surprisingly, she said "okay" without complaining.

Erin finished Singapore's primary program (nominally Grade 1-6, but more like 1-7 by Canadian standards) before her 10th birthday. She's now almost 12 and she hasn't really touched formal math in the past two years. Perhaps if she hadn't written it into her learning plan I would have convinced myself to let it lie. Maybe I shouldn't have been quite as eager when I saw the door was opened a crack. But whatever. She seemed to agree it was time to get back to formal math.

The next day, I grabbed the proverbial bull horns and said "okay, time for math."

She rolled her eyes, but came willingly.

Gosh, her computation sure is rusty. And she's having a hard time getting focused on the review work we're doing, as it's hazy and half-remembered. We had a few good laughs over it, actually, which shows how relaxed and comfortable she is with our math work, I guess.

Erin smiles guiltily, opens her mouth, looks blank and says ... "um, six? or, eight?" and starts laughing at herself.

"Erin," I say, laughing too. "You have this look on your face that says 'My brain is not present, but my mouth is open and I'm going to speak a number anyway.' You nut. Now, when your brain returns, maybe you could let me know what 4/18ths is."

She laughs a bit more and then it occurs to her that it's 2/9ths.

Three days in and it's flooding back and it's apparent that intellectually she's well beyond ready for this stuff and it will come really quickly. She's finished two (of twelve) chapters, and is agreeable and cheerful about our daily work together. It's almost enough to make me start to believe that there really are families that use a parent-directed curriculum without necessity of coercion.

Sophie is blasting through the end of Singapore 2B this week after having taken a several-month break. Noah has started plugging away at 3B again. I wouldn't be surprised if Sophie overtakes Noah some day before too long. She is so enthusiastic, and doesn't seem to have any trouble with the concepts. Noah doesn't have intellectual trouble with concepts either, but his perfectionistic defeatism gets in the way when he encounters something he doesn't get intuitively at a first glance.

So things feel kind of mathy around here all of a sudden. Fiona, on the other hand, is working on reading and writing right now. Today she learned to spell her name, verbally, on the computer, and with pencil and paper. Sophie taught her - what fun!
2 comments
Labels: Homeschooling, Mathematics

Me: "Fiona, you're playing in the pantry with the door closed. Are you sneaking treats?"
Fi: [while scarfing Christmas toffee] "Yes. ... I mean no. I'm sneaking snacks. I mean no. Not sneaking, just eating. Healthy snacks."

Fiona is growing up, and I'm looking at her moving out of toddlerhood with a certain wistfulness. She will be three soon and she's grown up faster than her older siblings, I think, because she drags herself relentlessly forward trying to keep up with them. She's also more verbal than any of them were, and more sociable. 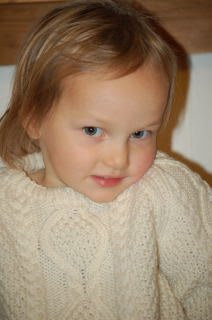 She still calls her forehead a "twohead." I think 8 or 10 months ago she mis-remembered the word, and the rest of the family took to her little slip with delight. But aside from this developmental anachronism and occasional overgeneralizations of grammatical rules, her speech is remarkably grown up. She has a whole lot of 'ketchup' adverbs ... words that get added as a condiment to various complex sentences. Words like "apparently" and "actually." A typical sentence: "Apparently I enjoyed the blueberry candy cane that I got at the Silverton Christmas Faire." She truly speaks in paragraphs, this child.

At the aforementioned Christmas Faire she met Santa. We've done next to nothing to hype the Santa Myth, since the older kids have never believed in the literal truth of it. But Fiona is at a wonderful age for wonder and excitement, and still isn't particularly interested in teasing apart the real and the imaginary. When we arrived at the Faire and she spotted the man in the bright red suit, her eyes got very big and a smile lit up her face. This particular Santa had a real bushy grey-white beard and was just milling about in the crowd, greeting children. Very unintimidating. Fiona walked up with her big round eyes and he squatted and had a few quiet words with her. She shook his hand. She told him she was all ready for Christmas. She was delighted by the whole encouter and so was I.

Lately I think I see flashes of the Future Fiona. When she plays her tiny violin, she bursts into tears when a note doesn't sound right. She sits on the couch with a needle and thread and a bin of 1/4" beads and spends 45 minutes silently stringing the longest necklace I've ever seen a child make. She painstakingly works to copy out her name in every colour marker she can find. She knows how to turn on charm to serve her wants and needs. She is curious about complex issues like death, war and family relatedness. She has a very complex understanding of time and tells me, for example, that she now goes longer and longer between breastfeeding, and after she turns three she'll stop breastfeeding altogether -- and I almost believe her.
0 comments
Labels: Family Matters