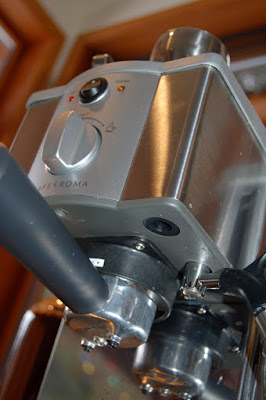 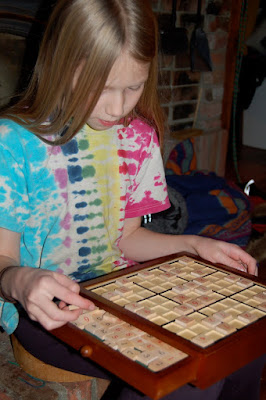 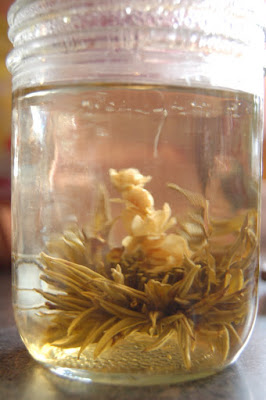 We like our new espresso machine, "bought" with grocery store points. It was our family's Christmas Eve treat for ourselves. The kids have a penchant for steamed milk, London Fogs and decaffuccinos. The adults like their lattés and cappuccinos. So far it has seen a whole lot of use. Everyone in the family now knows how to run through espresso shots and steam or froth milk.

Next, below, Sophie is playing with our new sudoku board. Sophie really likes sudoku but finds the physical/tactile version much easier and more fun to use. Especially fun are the little drawers on each side of the board for storing the number tiles.

At the bottom, a bloom of Two Hills art tea, in this case Jasmine Fairy Flower Green Tea. We recently discovered Two Hills, a local importer of quality organic Chinese teas farmed and processed ethically. The regular Jasmine Tea is like something from another world. The art tea version, which "blooms" in your cup, adds visual appeal too.

Our Christmas was as usual a fairly simple affair. Perhaps a little simpler than usual this year. On the gifting front there were a half dozen inextravagant gifts for each of the kids, a couple for the parents, plus a handful of "family gifts" like the ones pictured. Few gifts cost over $30, none over a hundred. Mostly useful things -- clothing, things for the bedroom, books. We had the usual cinnamon buns for breakfast, and a nice supper which included a small turkey for the meat-eaters. No extended family or friends over this year. Chuck was on call, though he only had to go into the hospital once during the day, which was nice.

Sometimes I wonder if we have simplified too much. For many years we focused on special things to do through the holidays, on making things by hand, on contributing good deeds around the community and beyond. Lately we don't even do that much, besides participating in the flurry of Christmas performances and doing a fair bit of charitable giving. So it's just not that big a deal, Christmas. It's a time to be together as a family, to focus on the value of giving, and participate in a few special rituals.

I'm not sure if it should be bigger. My kids' friends' families mostly make a much bigger deal over Christmas. The gifts, especially. Do mine feel embarrassed when their friends ask what their favourite Christmas gifts were and they have only a small humble few to choose amongst (a pair of mittens? a book? a jar of marmalade?), none of which rate next to the laptops, wii's, iPhones, iTouches, X-boxes, Kindles and such that the others got?

We had a nice Christmas. It wasn't the pinnacle day of the year (that would be the first Friday in August every year, the last day of SVI). No one's complaining. I guess we're doing okay.

And this year we had only a tiny handful of paper and plastic, plus two cardboard boxes, to dispose of.
Labels: Family Matters, Living simply