About a year ago we wrecked our deck. It was rotting and a danger. We needed any salvageable lumber to save the chickens from the bears. And it was ugly, badly positioned and too small. I also figured that wrecking it might facilitate the appearance of its replacement. Alas this was not the case, at least not so far. Our house remains deckless: 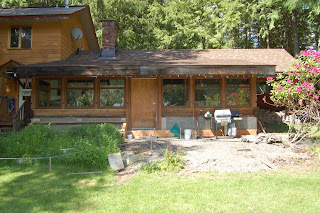 Blech, don't you think? This photo was taken at about 4:30 pm, and here you see the stupidity of the previous deck, which sat upon the mound of gravel on the right. While it gets no sun in the morning, that area is an exposed oven all through the afternoon, right up until supper time. And by contrast the area to the left gets warm morning sun and lovely afternoon shade.

Today, with the taxes done and the reward of a clear day, one of the things I got busy on was deck-pondering. I'd had a year to allow ideas to float by, to notice things about the empty space and the shape of the house, and the view and the grade. But serious thought started today. I sat down with a pencil and graph paper and recalled Pythagorus. I went outside and paced a few dimensions out. I came back in. I drew some more. I took some photos. I measured, staked, flagged, pulled things up, re-staked, measured dining space for six or eight, re-staked.

I had a general idea of what I was looking for and eventually it came together in about the right proportions. I staked it out to make a walk-through in front of the house, and then I had freehand fun with PaintShopPro. I now have an imaginary deck, which is a good sight better than no deck at all. You can all imagine with me .... 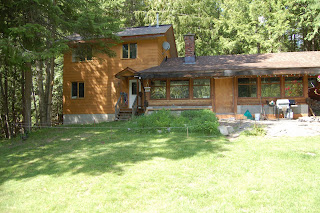 After!
After what, though? After when? Who knows........
Labels: Backyard doings, Miscellaneous