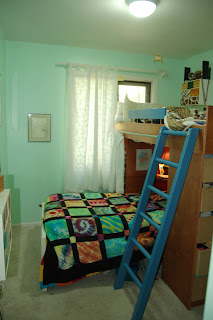 I like our house, I really do. It's not too big, it's not too small, though by 21st-century standards most people would think of it as very small for a family of six. It's short on storage space (there were no closets when we moved in) and there are, shall we say, some decorating issues. Forty-year-old carpeting and all that. But overall I like our house. It's basically in two halves, the milled-log-walled Old Part, which is fairly open and contains living room, family room, kitchen/dining area and a very small bathroom, and the frame-walled New Part, which contains the bedrooms, the laundry nook and a bathroom with bath/shower.

The master bedroom is a fair size but the kids' bedrooms are very small, as you can see from the photo, and this lack of bedroom space is the main thing I'd change about our house if I could. When we moved in we had one wee baby. Now we have a teen, a pre-teen and two more children.

The photo on the left shows the bedroom that Sophie and Fiona share. It has a loft bed arrangement with Sophie on top and Fiona on the bottom. The left wall is visible at the left edge of the photo (that's a tiny wall-mounted storage container, not a bureau, on the left). The photo is taken from the doorway, and the near wall can be seen protruding into the lower right corner of the picture. Tucked into that wall is, thankfully, a small closet. There's enough space in this room for the loft bunk unit, plus a narrow L-shaped pathway around it and that's it. The carpet you see is almost all the floorspace there is.

Sophie would love her own room ... for a bit more space, but mostly for a bit more privacy and the excitement of having her own space. There's a little space in the basement, but I use it as my teaching space now as it has a separate entrance. The kids often practice there, Erin especially. Until I can find somewhere else to teach, or build a music studio, Sophie can't use that as a bedroom. 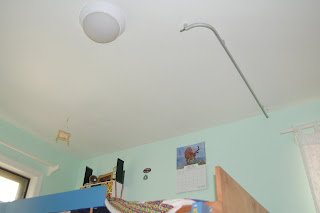 So we decided to make the best of the existing bedroom. First we replaced the curtains on the windows, from the existing medium-toned animal print to something a little 'older', brighter and more open. The curtain you see above is the new fabric. The room definitely felt bigger after that change.

The next thing we did was install a curving track on the ceiling around the upper bunk. You can see the first half of it in the picture at the right. It's an IKEA rig, a little like the shower curtain rod you might use for around a freestanding clawfoot tub.

Today we are sewing the remaining curtains. Fiona of course wanted her own bedroom nook, and luckily we have enough fabric to make her a single panel to close off the space beneath the upper bunk. Stayed tuned for "after" photos!
Labels: Family Matters, Living simply