Our Moose is Home!

Seventeen months ago we said goodbye to Musette Moose. She's a poseable stuffed moose. I sewed her a little polarfleece vest with a maple leaf on it, attached a Canadian lapel pin, put together a little suitcase containing a tiny violin and a blank spiral-bound journal, and mailed her to some friends of ours in the Yukon, in Canada's far north. Since then she has spent time with about a dozen other families around the world. The families are all involved in Suzuki music, and many are homeschoolers. They took such good care of her! They filled her suitcase with keyfobs and lapel pins, with miniature souvenirs and with hand-made garments representing their corner of the world, and they filled her journal with scores of photos, stories and description. She arrived back yesterday, having successfully circumnavigated the globe.

We have photos of Musette at the St. Louis Arch and struttin' along the banks of the Mississippi River. Musette in the streets of San Salvador. Musette at Geysir in Iceland. Musette at Edinburgh Castle. At Buckingham Palace. In front of the Washington Monument. In front of the Coliseum in Rome. Visiting with a kangaroo in Australia. Under the midnight sun in Alaska. Pictured in a newspaper article in New Zealand.

What an amazing project this has been!
0 comments
Labels: Homeschooling, Music education

Just a Day in the Life

I got up at 7:30, Chuck shortly after. Noah (8) was next up at about 8:45, followed by Fiona (21 months). I worked on the computer for a while, with my coffee. I'm still trying to get my new 'puter tweaked and all set up with my favourite software and all my restored files. Noah played Neopets for a few minutes but then opted for Playmobil in the loft. Fiona followed.

At 10:00 I got Erin (10) and Sophie (5) up. They stay up very late reading, and are always last out of bed. If I don't get them up they will sleep later and later each day, staying up later and later at night, so I make sure I have them up by 10 am or our ability to do things as a family really starts getting hampered by the unmeshed schedules.

At 10:30 we went to violin lessons. Sophie was first. She's working on Gossec Gavotte at the end of Suzuki Book 1 and everything is finally clicking. It was a very exciting lesson for both her and her violin teacher. Erin was next. Erin is practising very little lately; her enthusiasm is for piano. Yet despite having spent little time on her violin in the past week, she'd clearly done some good thoughtful work, because her Bach a minor last movement was much better! Noah is struggling lately. His teacher (my mom), he and I had a bit of a talk about how we can work best around his perfectionistic tendencies. He did some work on the Suzuki viola book 3 piece he's polishing up for performance at group class. He was given a bit of a nudge to get busy learning his next piece, because he's more than ready for it and just has to get down to the note-learning.

We got home at about 12:30. We ate lunch, fed & watered the chickens, collected the eggs, and did a bit of work on the Hallowe'en costumes. (Almost done! Fiona is Little Red Riding Hood while Erin is The Big Bad Wolf Dressed Up as RRH's Granny. Sophie is an owl. Noah is Anubis, the ancient Egyptian jackal god.) We went outside and did some garden work. Erin and Sophie planted flower bulbs. I planted garlic. We took down the plastic greenhouse, discovering to our surprise that there were three just-ripened tomatoes beneath it, despite the frozen ground elsewhere. Sophie and I pulled some carrots and jerusalem artichoke. We raked some leaves.

We came inside. I started pizza dough. We watched the first two hour-long episodes of "Canada: A People's History" on DVD. We have been reading aloud from "The Story of Canada" so that we get the somewhat same information in two different formats from two different points of view. Before we put it on Erin asked what would be covered in the first episode. I said "probably everything up to Leif the Lucky and his crew -- remember him? She said "well, yeah" (in a kind of a "duh!" voice) and then remarked "I learned about him in school." (She had tried school out for two days last spring.) I asked what else they had been studying. She explained that actually she hadn't learned about him, she'd been there for the end-of-unit test. I asked how she'd done.

We watched the DVD. Noah lost interest partway through and went back to the Playmobil. Fiona napped.

Sophie and Fiona and I made the pizzas. Erin and Noah practised piano.

We had a late supper after Chuck got home. Afterwards we built a bonfire and watched the eclipse. Noah and Sophie had showers. Sophie did four exercises from her new Singapore Math book. Erin wrote some stuff on the computer and played around with Geometers' Sketchpad for a while. I read aloud from "Firewing" by Kenneth Oppel. Noah went to sleep. Erin and Sophie went off to bed with their respective novels and who knows when they fell asleep.
0 comments
Labels: Day in the life, Homeschooling 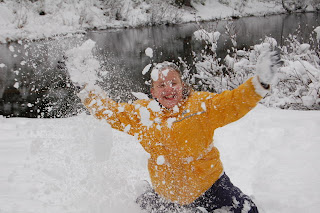 Yesterday we could see the snow falling on the mountains above us. The kids were lazy and aimless. I had lots of fussy errands to do and the day was dreary and uninviting. I did some stuff at home, ran to town with the little one, did half of what I had on my list and thought "Snow Day!"

I drove home and picked up the older kids. Told them to grab their new winter boots, their winter jackets and their mittens. I drove up towards the pass. After about 10 minutes of driving we came to a lovely little lake at the saddle of the pass where the trees were cloaked in snow and there was a couple of inches of the fluffy white stuff on the ground. We parked the van and got out.

For an hour we ran around throwing snowballs at each other, building small snowmen, making slushy snow-angles, eating the snow. Then we piled in the van and drove home, the kids cherishing the shrinking snowmen they were holding on their laps. We put the snowmen in the deep freeze, built a fire in the woodstove and drank hot chocolate.

We decided we'll do this every year. The first time winter's in the neighbourhood, we'll go out and meet him and invite him to drop by our place.
0 comments
Labels: Living simply, The Natural World

We've lived in our little corner of the province for 10 years and this is the first year we've mushroomed. Back in the 1970's an underground economy sprang up in our area when it was discovered that the pine mushroom, which grows in our region after the first fall rains, was equivalent to the much-prized matsutake mushroom of Japan. People have made as much as $40,000 in 3 weeks in the past. Nowadays there are so many pickers out that profits are much smaller, but it can be lucrative.

Not this year. It was dry for 15 months and then it rained for a month straight. And then the sun came out and the ground warmed up a bit, and the pine mushrooms started popping up by the thousands. Friends of ours went out last week and picked 60 lb. in a single afternoon. This is a mushroom that in a year of scarcity will fetch $50-100/lb for Grade 1 specimens. This year the price is $2-4/lb.

Well, we were given a couple of dozen pounds. They are delicious! They cook up firm with a lovely flavour that's aromatic and almost spicy. And we decided we should go out picking to find some of our own. We had touched and smelled and handled and tasted so many that, when given a few tips by our friends we felt confident that we could find our own and identify them with certainty. We headed out on a long logging-road drive north of the lake and came out at a forestry service campsite area. The kids mostly hung out at the beach playing with rocks, water and sticks, while I went off in the woods and hopped across acres and acres of moss hunting the elusive gourmet mushroom. I found about 10 lbs.

At home we're eating mushrooms like crazy, and dehydrating them like crazy too. I've got a couple of pounds of dried mushrooms (that's a lot... maybe 30 lb. worth!). And tonight I tried out a soup mix I'm concocting ... dehydrated pine mushrooms with spices including wild ginger and dried veggies etc. to make a hot & sour soup. I think it's a go, and we'll send it out as Christmas gifts in ziploc bags.

Our area is just so beautiful at this time of year, I can hardly believe it.