Yesterday was our winter Suzuki recital. All the kids who study locally with my mom or me played. For the first time we were able to "hire from within" for the accompanying. Erin hasn't had a piano lesson in two years, but she continues to enjoy accompanying. She is making pretty good money as the accompanist for the local community choir, and is doing a great job. When accompanying Suzuki students she is a natural: she knows every piece intimately as a violinist and therefore can anticipate and react in a split second to common stumbles. She knows the tempos inside out, and recognizes when to push a student a little for a steady tempo and when to respond to the student's preferences.

A friend of mine video'd Sophie's and Fiona's performances. Sophie just got her violin back from a three-month stay in the violin hospital where it had a bunch of old repair work and some niggling cracks set to rights. She had been playing on a cheap factory-made instrument in the interim, and was so happy to have her Mittenwald 3/4 back in time for the performance. She put out a huge confident sound!

I think slow movements are SO challenging to play on eighth-sized violins and bows, so I take my hat off to Fiona for fitting six slow beats into her bowstrokes in this piece. Her shifting and trills have come along really nicely in the past couple of months.
5 comments
Labels: Music education, Videos

Sophie at the wheel

Sophie has been coming to Nelson with us on Tuesdays for the past month. The older kids have Corazón rehearsal on Tuesdays, so I end up driving four teens to rehearsal and back. Fiona likes to come along for the pleasure of being out and about. I do the grocery shopping and run errands. Sophie usually likes to stay home and enjoy afternoons alone or with her friend Ali. But recently she's been taking some pottery classes at Kootenay School of the Arts, so she's been coming along on Tuesdays.
Sophie really likes working with clay. She'd done a series of kids' clay classes four years ago and had always wanted to do more. She'd particularly hoped for a chance to learn to use a pottery wheel. The course for 8- through 13-year-olds at KSA seemed perfect. With a dozen or more pottery wheels on site, they promised to let the kids try out using them. The 8 - 13 age range proved sticky, though, since it included both Sophie and Fiona. And while Sophie had decided this class was definitely her thing, Fiona naturally wanted to be part of it too -- Fiona is always keen to try anything! This is the one little corner of sibling rivalry in our family right now: Sophie really wants her out-of-home activities to be ventures in independence and a life apart from family. Having a little sister, even a precocious cheerful one whom you love, tagging along kind of ruins that feeling.

How fortunate, then, that it turned out the set of classes was being offered twice: once in January/February and once in March. Sophie took the first session. Fiona's classes start next week.

Sophie's instructor was very impressed with her work, but we hadn't really seen what she was turning out until today. Here are the finished products:

I'd really like to see her continue with this interest. She obviously loves it. I think her pieces are awesome! The question is how we can support her in it, short of spending thousands of dollars on wheel and kiln. We have a couple of ideas. Time will tell.
8 comments
Labels: Creativity, Homeschooling

A Thing About Tea

We seem to have A Thing About Tea. We are hopelessly addicted to loose leaf tea. We have done five big orders from David's Tea since early last fall, supplemented by Two Hills and Teaopia purchases now and then.

We're don't have sophisticated tastes. We probably couldn't definitively identify an assam vs. a lapsang suchong. We like weird herbals and party teas as much as traditional blends. But we do love the freshness and variety of boutique store loose-leaf tea. The cupboard currently contains fourteen different varieties of loose-leaf tea. You would have thought it was Christmas yesterday from the excitement that erupted when Chuck came home from the post office with the latest mail-order.

In this photo you can also see the three volumes that comprise our kitchen reference library. For curious and creative cooks, these are fabulous resources. First, the bible of kitchen science, Harold McGee's "On Food and Cooking: The Science and Lore of the Kitchen." If you want to know what copper bowls do to egg whites and why, or what "double-acting baking powder" really is, or why you need to punch down bread dough part-way through the rise, this book will explain it all. Next, "The Flavour Bible" by Page and Dornenberg, sort of like a thesaurus for flavours. Look up feta cheese, or figs, or garbanzo beans, and you'll find a huge long list of complementary foods and common and unusual combinations of flavours that include that ingredient. If you have a bunch of dried apricots, or a dusty packet of wild rice, or someone gave you an armload of mizuno and you want to experiment and make up new recipes which include your ingredients, this is the place to turn for inspiration. Finally, the book "Ratio," by Michael Ruhlman. This is pretty much devoted to baking, and to the basic ratios that most common baked recipes rely on. How many parts fat to sugar to liquid to flour to leavener in a cookie recipe? How does the ratio change if you want a chewy cookie rather than a crunchie one? What is it about the proportions that changes if you're making a quick bread, or a muffin? If you like to invent or radically modify baking recipes, this book helps you understand which proportions are required and avoid costly mistakes.
4 comments
Labels: Books, Resources 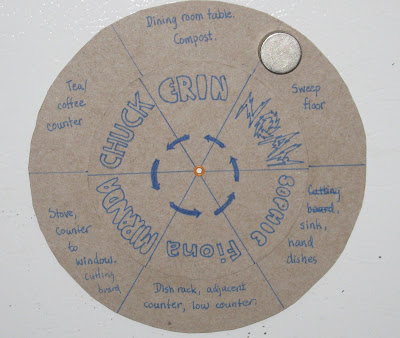 When your family generally runs as a democracy, when everyone has good intentions but busy-ness and inertia get in the way, sometimes the best solution is an old-fashioned parental proclamation.

"Here's the chore rotation for after supper clean-up."

I guess when you don't tell people they have to do work very often, they are pretty likely to heed you when you do.

Every night we spin the wheel one stop counterclockwise and everyone switches jobs. And almost every night the kitchen ends up spotlessly clean in the space of about ten minutes.
2 comments
Labels: Family Matters 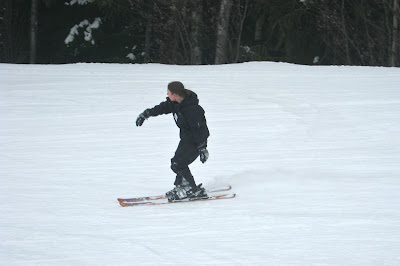 It was a family ski day. Chuck had to go to Nelson but the rest of us headed to the ski hill 30 minutes north, a small family-friendly hill. It has a handful of runs (one easy, a few intermediate, a few expert), a short steep T-bar and about 500 vertical feet of drop. No lineups, so you can get dozens of runs in in a day.

Believe it or not Erin hadn't been skiing since she was a tyke, and Noah had never ever been. With Chuck on call so much, it was pretty much going to end up being me and three beginning skiers on the hill with a toddler to also look after ... and that didn't seem humanly possible. 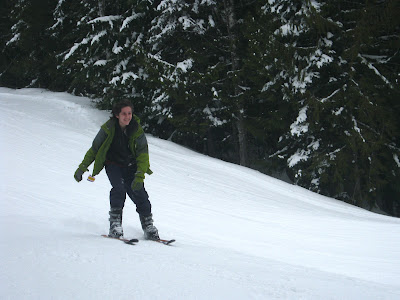 And then the years just slipped by. Life got very full -- so much travel, so many rehearsals. Any free day was needed for recharging, and somehow we never went skiing.

Finally this year Sophie and Fiona started skiing, initially with the school's ski program. During this program they had instructors on hand so they got lessons and progressed quickly. They were soon skiing well and managing the T-bar just fine together. So I figured it was time to get the big kids going. 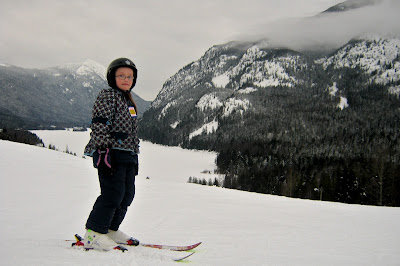 Erin got her ski legs back pretty quickly, and Noah, daredevil that he is, did some lovely wipeouts trying to go faster than any beginner should ever go, but eventually saw the wisdom of learning to control his speed. Which he did, quite capably. 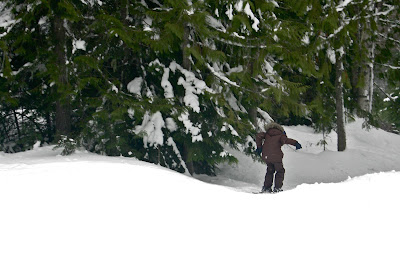 Sophie got confident enough to try the t-bar solo and discovered it was easy. Sophie and Fiona enjoyed a combination of beginning and intermediate runs, and especially the trails through the forest.

Unfortunately Sophie got a migraine in the afternoon so we cut the day a little short. But not too much ... I had some viola teaching to do, and we were expecting company for dinner, so we weren't going to ski until closing anyway. But we'll be back I think. And Sophie has already decided she wants a season's pass for next year. (I think Fiona will be lined up right behind her.)
2 comments
Labels: Day in the life

Unschooling in a nutshell