Two years ago I ran the 25k Sufferfest True Blue trail run. I hadn't trained specifically for it, though I had been training hard that summer. It was the first year for Sufferfest and I wanted to support the event, just a stone's throw from my home town. I originally thought to run the 10k event, though the 25k looked enticing. I had just run my first-ever race, an Alberta (i.e. flat) Half Marathon three weeks earlier and was feeling good. I figured an extra 4 kms wasn't that big a difference.

But it turned out the Sufferfest trail run was a whole different animal. Steep up, steep down, rooty and rocky. I had also just switched over to minimalist trail shoes and though I had run in them a fair bit, I hadn't really run any trails. I felt great at the outset and ran hard -- over all that crazy terrain, which quickly took its toll on me. My knee and my foot were paying the price by the end and I did a long rallentando to the finish line. It took me weeks to recover.

So you'd think that if I entered Sufferfest again I'd be a little more judicious in my choice of events. But no, I've gone an entered the 25k again, despite a summer of little to no training. I've been running on and off, but no real long runs, only a handful over 5 km and nothing at all systematic. (And I've entered the 45k mountain-bike race the day before. It's a length that's almost double the longest trail ride I've ever done in my life.)

The bike stupidity aside, I feel differently about it all this time around. I have a lot more experience pacing myself over long runs and steep trails. I've been running in a minimalist way for a long time now. I plan to run in my Minimus Trail 10's. They're considerably more minimalist than the shoes I ran my first Sufferfest in, but now they rank as old favourites, and more shoe than I usually run in. On roads I run barefoot. On rough trails these days I wear either Unshoes, my home-made huaraches or Minimus Zeros. So the Minimus 10's are a solid old standby. I know they'll work for me. My muscles, ligaments and tendons have adapted to this kind of running -- and some -- and I've done a lot of miles on exactly the sort of trails I'll be running this weekend. I've also noticed that my body is pretty good at endurance running. It forgives my completely non-systematic increases in mileage. I'm fine running nothing more than 5 km for a couple of months and then going out and doing a challenging 15k. Sure, Sufferfest is a big run and I'll be tired and sore as stink, but I don't think I'll be injured.

Not unless that bike ride kills me. Stay tuned.
1 comments
Labels: Running 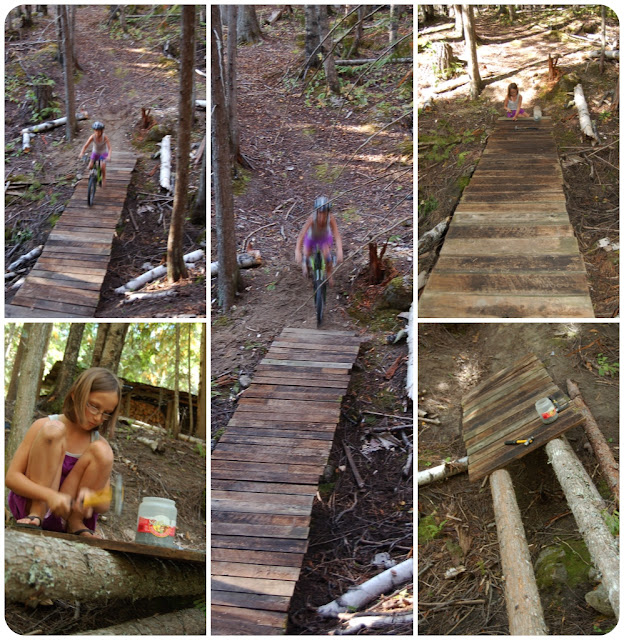 Our property is ideally situated to avoid logging, development or loss of privacy. We own a mere 2.5 acres (1.0 Ha) but the surrounding crown land is heavily forested, but steep and creeky -- not suitable for logging. Above us runs the highway, and a long way down a 45- to 60-degree slope is a regional park, so no risk of anything man-made growing up in either of those directions. Which is lovely, except that it makes it almost impossible to create any trails that start at our place and connect up with anything. We're prisoners of our terrain. Our small area of more moderate grade is all we've got to work with.

So Fiona and I decided that if we can't hook into the nearby cross-country trails from our property, we could at least create some sort of interesting circuit to make use of on our bikes. We have dreams of a reticular network of tiny trails connecting obstacles, jumps, skinnies, ramps and whatever else we can dream up. Today, with Chuck's help we got started. We used two 18' cedar logs to span a small gully. Then Fiona got busy with hammer, nails and a bunch of cedar decking recycled from our old deck.

In less than an hour we had completed the bridge. Fiona got up her courage: the access at the far side comes from a short but steep slope. She made it across without any difficulty!