So much for a new washer 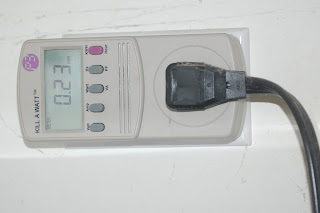 My seemingly terminal case of LG Tromm envy has gone into remission. Today we had enough water flow into the reservoir to allow me to do some much-needed laundry. My research on Canada's EnerGuide site had suggested that a circa 1993 extra-capacity Kenmore top-loading washer used about 740 kWh/year. An appalling figure, considering new 'green' front-loaders use as little at 150 of those precious kWh of electricity per year.

However, I had a sneaking suspicion that I was using a fair bit less than the estimated 740 kWh. We don't actually do a lot of laundry for a family of six. We subscribe to the "don't wash it unless it's got obvious dirt or obvious smell" laundry philosophy. We wash linens infrequently, jeans when they're ready to walk away on their own, shirts after one to three days of wear depending on the armpits and sloppiness of the wearer, and sweaters, hoodies, and other over-garments rarely. Socks and undies usually make it to the hamper daily, but they're the only thing. We do a maximum of five loads of laundry a week. Which is fortunate, because we can't line-dry more than that indoors in the winter. We also use cold water exclusively for washing. What I wanted was not an estimate based on an average washer like ours being used with average frequency according to standard practices, but an accurate profile of our laundry energy use.

That's when I remembered our little energy meter. I bought it years ago from a specialty electronics outfit, but they're now available at your average Crappy Tire store. I plugged it in to my washer and ran my standard cold-water wash. Results as above. A single laundry load uses a mere 0.23 kWh. At 260 loads per year (likely a significant over-estimate) that means we're only using 60 kWh/year with our clothes-washing. A far cry from the Energuide estimate of 740. Sixty measly kWh/year rather than 740.

Why the difference? The main factor is that we're not consuming electricity to heat the water.
Also, from what I can tell, EnerGuide assumes 392 loads a year, so we're also doing a third less laundry. And it looks like we'll keep doing that laundry in our ageing top-loader until it expires.
Labels: Living simply