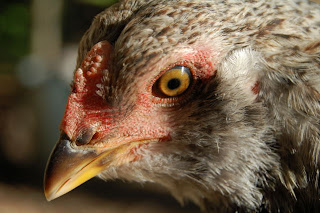 Not a skunk, the Skunk. Skunk, the chicken, that we've had a soft spot for since he popped out of the post office box as a day-old chick with striking black and blond striped markings. As a youngster he had personality and markings that made me grab the camera. Even as he grew into that lanky adolescent phase we knew there was something special about him. We'd decided quite early on that we would keep a rooster in this flock, and that it would be one of our four Ameracaunas, since we want to hatch more of this breed. So we were thrilled to peg Skunk as a cockerel. He's our keeper.

Skunk has a reputation as the Pinball Clemens of chickens. He rarely uses his wings, but oh my, his legs! He is quick and incredibly agile. He swerves and dekes and is impossible to outrun, though the kids try frequently. The only way to get him from the coop to the corral is to let him think it's his idea. Herding him does not work in the slightest, not even with three or four children, one of whom is operating a remote-control Hummer in an attempt to cut him off as he comes around the corner. Picture the roadrunner of cartoon fame. He's quite something. 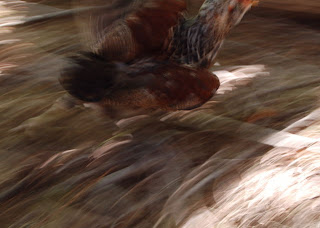 It's not just me, either. Noah was the one wandering around with the camera today, and he chose Skunk as his subject. Skunk is now well into adolescence and his black tail-feathers are starting to grow out with a gorgeous green iridescence. His pea comb is the chicken equivalent of a teenage boy's first hint of facial hair. While the photo above shows his philosophical side, the one on the right is quintessential Skunk. His legs are bluish-grey, but you can't see them. They're a Looney Tunes blur and nothing more.