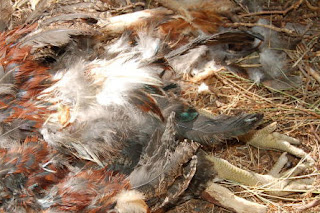 Yesterday we went to the park to meet some friends for a potluck dinner. While we were there, we talked (as we always do) about who has had bear problems. "The Big Cinnamon Bear" that's been a problem around various properties east of town came up for discussion. No, we'd had a smallish black bear, and a larger black one, but not the BCB.

But when we came home, there he was. He had trashed the fencing around our chicken corral and was sitting inside it, merrily feasting on 9 of our hens, including our beloved Skunk. The carnage was awful.

Several other favourites survived -- Toy, Brownie, Minnie and Beluga. But Skunk, the greatest rooster-to-be I ever met, the Pinball Clemens of chickens, with his falcon-like head and brick-red and iridescent black-green plumage, our one-of-a-kind heritage breed Ameraucana cockerel, is no more.

Today the bear was back a couple of times. Chuck gave him one good sting with the air rifle and he took off somewhat reluctantly. The chickens have to have almost arms-length supervision at this point. I had them out for three hours of free-ranging, (which was when the bear showed up) but they are back inside the coop now under lock and key.

Time is of the essence now. I had gradually been smashing up the bits of concrete and digging up the metal posts that riddle the area where the fully-enclosed outdoor chicken run needs to go. Today I spent hours smashing, throwing and digging post holes. Between Chuck and me we got seven of the nine done. Tomorrow we begin construction.
Labels: Living simply, The Natural World, The ugly face of reality