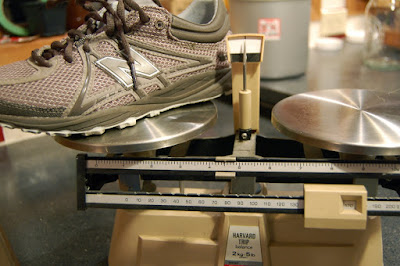 I needed a winter shoe. Much as I love barefooting, it isn't going to work in snow and ice on minus 10 days in January. My Vibram KSOs were purchased to fit my naked foot; they don't fit toe socks and are mesh-topped, so they won't keep frostbite at bay. And they have no real tread to bite into the slippery stuff.

I did a lot of research into what might suit me and settled on the New Balance WT100. It's a kind of obscure shoe. While wildly popular among minimalist runners, it's not the sort of thing regular running stores carry. Most runners and running-store managers work on the assumption that trail running is where you're most in need of thick soles, serious cushioning and a ton of support. After all, the ground is rough and uneven, so protection needs to be the name of the game, right? So I wasn't surprised that these shoes were nowhere to be seen on the shelves at the Canadian running chain stores I checked. And of course they weren't at the general sports stores either. I looked on-line. They were available at a small handful of on-line retailers in the US, but none of them were able to ship to Canada. And on-line in Canada? Nothing. I found a New Balance store in Calgary and made a special trip across the city to check it out. It wasn't there either.

And then later that day I had to go to a little independent running store in the city to pick up my race registration package. And on my way out I scanned the wall o' shoes with little hope. Nothing. Not a minimalist shoe to be seen.

"Can I help you?" asked a salesguy. I hate shopping mostly because I don't much like dealing with salespeople. But he seemed nice enough. I figured I'd humour him.

"I'm looking for a minimalist trail shoe," I said. "Super lightweight, no support. Just something I can wear socks in when I can't run barefoot in the winter."

"Hmm, tall order," he said. "We don't generally stock anything like that. But what size are you? I'll check in back. We sometimes get some special orders returned and I can look through those."

I told him my size and he disappeared. I was pretty sure he'd either be back empty-handed, or worse, he'd come back with something I didn't want and give me some sales spiel about how it was really what I should be using, and was much like a minimalist shoe, but it wouldn't be. And I'd feel all awkward and resentful about the pitch and I would wish I'd told him I was just browsing and high-tailed it out of the store.

"It's the New Balance WT100. The best minimalist trail running shoe we've seen. They're pretty popular lately, so we're doing a fair number of special orders for them. I guess these ones were the wrong size for someone."

"Oh my gosh!" I said. "These are the shoes I had given up hope of finding. These exact shoes." I tried them on. They fit. And they felt like nothing -- which is a good thing in minimalist footwear.

I wore them around for a few days to get used to them and make sure they wouldn't give me blisters. No problem. Today I did my first run in them, an easy 6k. They feel great. I think they're my favourite shoes already. My only complaint is that there's still a significant bit of heel rise -- 8 mm, which is less than in traditional running shoes, but still more than I'd like. But I can deal with that for now.

Because guess what? There's an even more exciting New Balance shoe on the horizon called the Minimus. And "my" running shoe guy says they'll be stocking that one at their cool little independent store in March when it comes out. I should be just about ready for a new pair of shoes by then.
Labels: Running