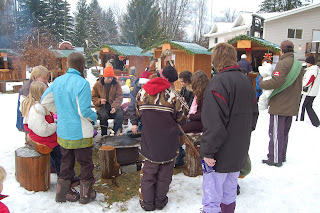 It started last year and was a tremendous success. It's a European-style indoor/outdoor Christmas market and community event organized by a number of community-minded folk, in particular those who have moved here from Germany in the past couple of decades. It's held in the open area in front of a local gallery and multi-purpose building, on the large lawn which also houses the outdoor mining museum. In amongst the displays of old rock drills, Pelton wheels and tramways, they erect a sound stage, a bratwurst gazebo, an indoor artisans' market, a couple of bonfire rings with bannock and chestnuts a-roasting, an ice slide, ice sculptures and a dozen or so outdoor booths selling handicrafts, treats, hot beverages and soups. 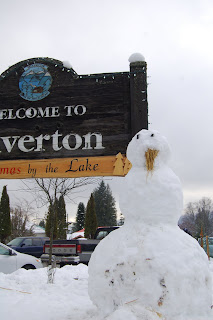 We were away in Calgary for most of the event this year, but it was the first item on the agenda upon our return from Calgary Saturday evening. Erin and I had to take off immediately for one of her choir performances in Nelson. The kids made use of the new-fallen snow to build a magnificently huge snowman on a corner of the site. They got a little help from their dad with the mega-snowball-wielding, and then later added a straw beard and some charcoal eyes. Somehow a carrot was nowhere to be found.

Last year the temperatures were well below minus 10 Celsius (14F) the whole three days. I'll never forget Erin and her quartet trying to perform in those temperatures. This year things were really a little too balmy, hovering right around the freezing point the whole time. Still, the ground stayed mostly white and it didn't actually rain at any point. 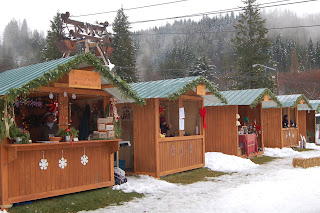 I managed to get there today for an hour or so. I saw the snowguy in all his soggy bearded glory. The ice slide was listing a little to port but was otherwise functional -- and was being greatly enjoyed by the children. The glüwein was hot and delicious. It was a great place to bump into people and chat. The kids formed a chattering ring around the central bonfire. You can see Erin above in the light teal jacket, wearing her silk green choir shirt and black pants; she was on her way to yet another choir performance.

Last year Christmas by the Lake felt like it had the makings of an instant family and community tradition. It is now firmly entrenched amongst our December traditions. I think it represents the official beginning of the holiday season for us.
Labels: Community