Sophie had been asking about a clay class since last summer. We tried to slot her into a class before Christmas, but it happened on the 'wrong' day for our schedule. We tried to create a class for her on another day but couldn't find enough kids. Finally in February the stars aligned and we ended up with the right group of kids on the right day. Sophie eagerly jumped aboard. Erin shrugged and figured she'd sign up too; she'd enjoy the social time at least.

The classes proved to be a seriously fun time with six girls, age 8-13, all of whom were serious about doing some work with clay, and who greatly enjoyed each other's company. A lot of silliness went on, but it didn't get in the way of the work.

The classes lasted a month and we just managed to pick up the stuff from the final glazing. Here are a few of the items. Clockwise from upper left. (1) Sophie's lion, detail of head. This is quite a small figure with the head about the same size as an adult's thumb and was all done freehand with fingers. I'm impressed with the cat-like snout and jaw. (2) Sophie's mug. Alas, it leaks from an invisible gap in the seam at the bottom. She was so disappointed not to be able to drink hot chocolate from it. Suggestions for repair are welcome. Epoxy, perhaps? She is keen to try using the wheel next time she does some pottery so as to avoid the risks inherent in seams. This mug was made from two sheets of clay, much like a tin can, with the cylindrical sheet embossed with stamps the girls made. (3) Erin's bird. I love love love this piece. Photos don't really do it justice. She has created something that so captures the curiosity, vulnerability and pensiveness of a young bird in a nest. (4) Erin's praying nun. There were a few Euwy figures created, and this is one of them, though it doesn't seem to be either of the types mentioned in the article linked. Very simple shape, with almost no surface detail, but there's no doubt what it is. (5) A pinch pot by Erin with some funky rim detail.


Erin enjoyed the class a lot but doesn't feel it's something she wants to pursue at this point. Sophie, on the other hand, fully intends to go back for more classes the next chance she gets. She really loves working with clay.

Noah has been interested in wood-carving for a while. He whittled with no particular aim in mind with his Swiss Army knife for a year or so, and expressed an interest in doing something with his urge to use sharp blades. For Christmas he got this beginners carving set from Lee Valley, and we followed that up with Chris Lubkeman's "Little Book of Whittling". He's been merrily whittling hazelwood boughs on and off during readaloud time for the past couple of months. Mostly he likes the meditative effect of knife on wood, of shaving and shaping. But he has created a couple of useful items, like this beaded campfire hotdog fork. I have commissioned a conducting baton which is gradually taking shape. Where else but in the Slocan Valley would an orchestra conductor use a hand-whittled hazelwood baton? 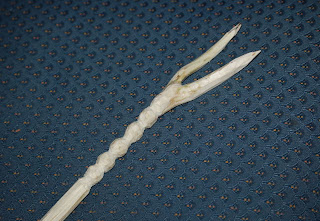 I love to see my kids making things with their hands. We're really missing the art class the three older ones have enjoyed in the past -- it's not being offered this year. So I'm glad that some crafts are filling the void a little.
Labels: Creativity, Homeschooling, Living simply